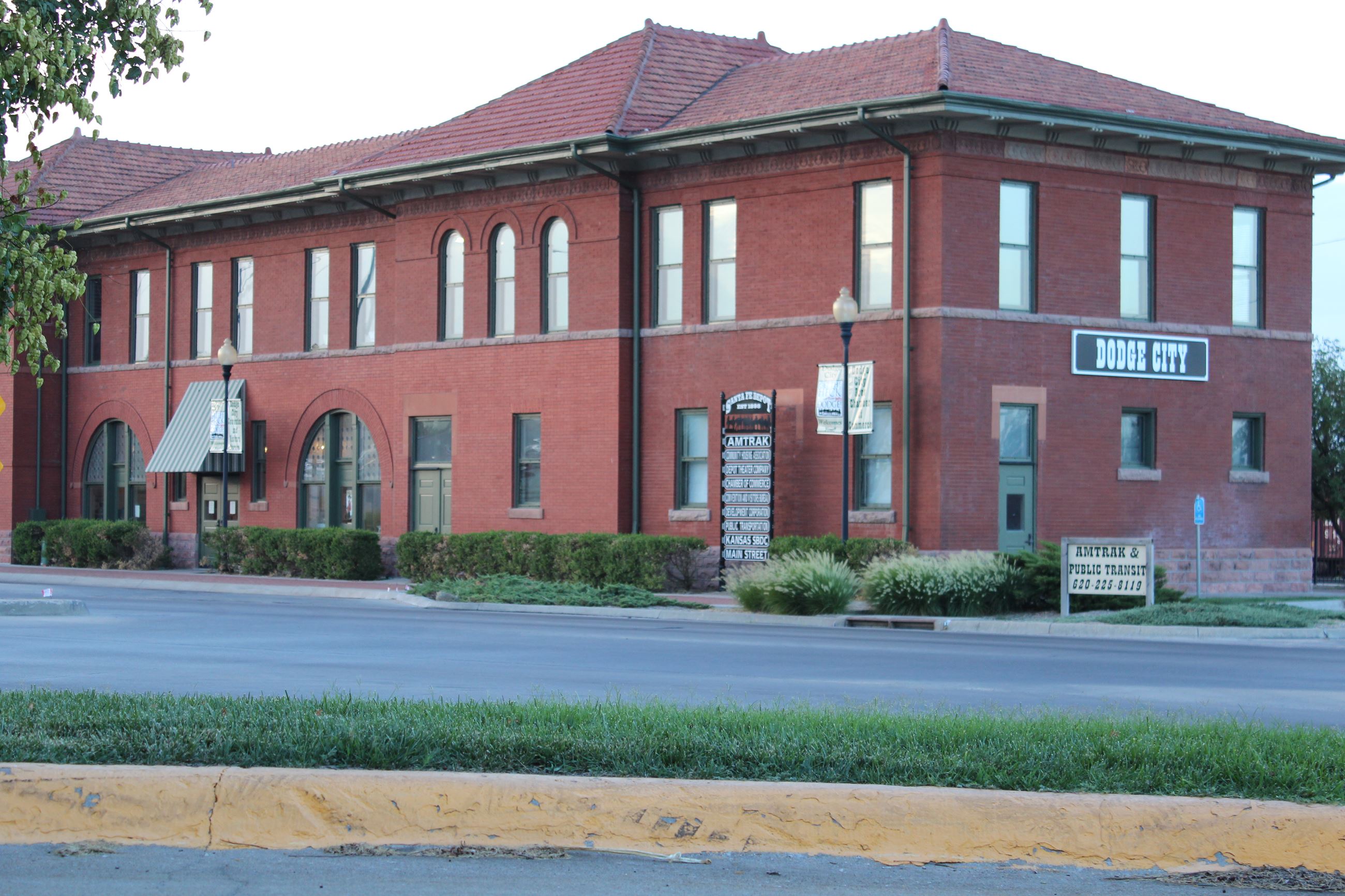 The Amtrak stop in Dodge City is located at the former El Vaquero Harvey House and depot, a two-story red brick Richardsonian Romanesque style structure that was built in 1898 by the Atchison, Topeka and Santa Fe Railway (ATSF) and subsequently enlarged and altered. Occupying almost two blocks, the building included a passenger depot and railroad offices, as well as a hotel and eating house run by Fred Harvey. The “Harvey Houses,” as they were known, dotted the ATSF tracks across the West. In the days before dining cars became common, passengers had to detrain in order to eat a meal at a trackside restaurant. The food was generally of poor quality until Fred Harvey revolutionized the offerings starting in the 1870s.

By the turn of the 20th century, the ATSF and Fred Harvey had begun to build a series of trackside hotels in the Southwest that were meant to attract tourists and help generate money for both companies. The buildings often adhered to fanciful designs that looked to the region’s American Indian and Spanish past. Drawing on these traditions, the railroad and Fred Harvey created resorts replete with a bit of exoticism that drew tourists from across the United States and even abroad.

Faced with a decline in passenger rail traffic, many Harvey Houses were shuttered in the 1940s and 1950s–including El Vaquero, which closed in 1948. Portions of the hotel structure were used thereafter as railroad offices, while other areas were boarded up with all the furnishings and fixtures left in place. In 1996, BNSF Railway donated the depot to the city, and it was placed on the National Register of Historic Places in 2000.

The Santa Fe Depot, the largest depot still standing in the state of Kansas, has been completely rehabilitated to its early appearance and is today 100 percent occupied. From 2000 to 2003, the depot and the El Vaquero/Harvey House restaurant were renovated with funding through grants from the Kansas Department of Transportation, U. S. Department of Transportation via the TEA-21 reimbursement program and the Kansas State Historical Society, as well as private donations gathered by the Boot Hill Repertory Company (now the Depot Theater Company) and funding from Dodge City.

The Depot Theater Company is a major tenant in the building and the crown jewel of the Southwest Kansas theater scene. Visitors to the theater can enjoy state-of-the-art dinner theater, cabarets, murder mystery dinners and a variety of other events and activities. The theater boasts a youth division program and Final Fridays (on the last Friday of the month) with live performances.

In 2015, the city assumed management of the historic Santa Fe Depot Complex. Ongoing restoration efforts have included repointing the brick, stone and mortar of the exterior, which was paid for by city funds committed to the building through the “Why Not Dodge” sales tax as well as historic rehabilitation tax credits. A $90,000 Heritage Trust Fund grant awarded by the Kansas State Historical Society was combined with funds from the city and tax credits to restore the windows, doors and soffits on the south and west side of the building. The city was then awarded $258,000 through the Federal Highway Administration’s Transportation Enhancement (TE) program to support further station rehabilitation work. Under the TE program, funds can be used for activities related to the preservation of historic transportation facilities, including depots. The grant allowed for rehabilitation and replacement of the doors, windows and soffits on the north and east sides of the building.

The city rehabilitated the second and third floors of the depot for office space in 2016. These areas, which formerly housed the hotel, had been demolished in the previous remodel. They now accommodate the offices of the Dodge City Convention and Visitor’s Bureau, Dodge City Ford County Development Corporation and the Dodge City Area Chamber of Commerce. The build out cost $774,000 and was paid for through the city’s transient guest tax along with historic rehabilitation tax credits. The finishes, including woodwork throughout, mimic the appearance of the original Fred Harvey hotel rooms. Visitors can step back in time in a hotel room and bathroom refurbished by the Depot Theater Guild to reflect the Fred Harvey era.

The former hotel lobby is the main gathering room and features many of the original fixtures, flooring, counter, woodwork and leaded glass windows. The Harvey House dining room has been restored for use as a meeting and special event space. City staff open the waiting room for Amtrak customers one hour prior to the arrival of the Southwest Chief and offer hot beverage service and restrooms. The Amtrak area also houses the offices of Dodge City Public Transit, whose bus routes all serve the depot.

Dodge City is the seat of Ford County, and the community sits near the Arkansas River and the 100th meridian, in an area of complete prairie. From 1847 until 1882, a sequence of forts was built in the Dodge City area to protect travelers along the Santa Fe Trail, ending with the U.S. Army’s Fort Dodge. Cattle ranching, travel along the Santa Fe Trail and the approach of the ATSF all encouraged people to settle and found Dodge City in 1872, just five miles west of Fort Dodge. The ATSF arrived in September 1872 to find a town ready and waiting for business.

In 1883 and 1884, Dodge City experienced a boom as a Cow Town, due to it being the best place for cattle herds to meet the railroad. Cattle were driven up from Texas to the railheads in Kansas; however it was thought that the Texas longhorns were spreading splenic fever via ticks to other cattle. In 1885, the Kansas state legislature extended a quarantine across the state, and within a year the cowboys, saloon keepers, gamblers and brothel owners had moved west. Dodge City became a town like other agricultural communities in the area.

Later, it was learned the Texas cattle did not have the ticks on them, but rather the eggs were imbedded in the mud in their feet. The mud needed to be cleaned out and the threat of ticks would be eliminated. Dodge City successfully lobbied to repeal the quarantine years later, but the Texas cattle industry had already made other arrangements by routing the cattle to Missouri. This city never regained the cattle trade it once had.

As an archetypal town of the American Old West, Dodge City is also famous as the setting for the long-running radio and television western drama, Gunsmoke.

Amtrak does not provide ticketing or baggage services at this facility, which is served by two daily trains.