Clandestine methamphetamine (meth) manufacture is one of the most serious and dangerous of current drug issues being faced by law enforcement and the public. Illicit manufacture of meth involves the process of combining multiple chemicals to another substance (referred to as a "precursor") to create methamphetamine. The most common precursor used is "pseudoephedrine" found in many over-the-counter cold and allergy medications. The tablets containing pseudoephedrine are crushed, then the powder is dissolved and mixed with various chemicals to create the reactions that convert the pseudoephedrine to methamphetamine. The process of combining these chemicals creates hazardous conditions, including a strong risk of fire, explosion or toxic gases, as well as a substantial amount of hazardous chemical waste. This creates not only an increased threat to the safety of law enforcement and medical first-responders, but also to the public.

Methamphetamine is extremely addictive and provides a longer and more intense high than many other street drugs. Its use is widespread, making it competitively priced and easily accessible among other street drugs. In recent years, there have been significant simplifications discovered in the processes for producing methamphetamine. The ingredients necessary can largely be obtained from over-the-counter household chemicals. There are a number of different "recipes" or methods of producing methamphetamine, each involving the use of various chemicals.

You should also be suspicious of strong chemical odors associated with the process of making meth. It can include strong solvent odors, ammonia odors, or a pungent odor that some have compared to "smelly sweat socks". There are other "indicators" of the presence of a meth lab to watch for: multiple coffee filters with chemical stains, glass or plastic jars with chemicals separating into layers or containing chemical residue, broken open lithium battery casings, multiple empty containers of gas-line treatment, and multiple empty packages or blister packs from cold and allergy medications. 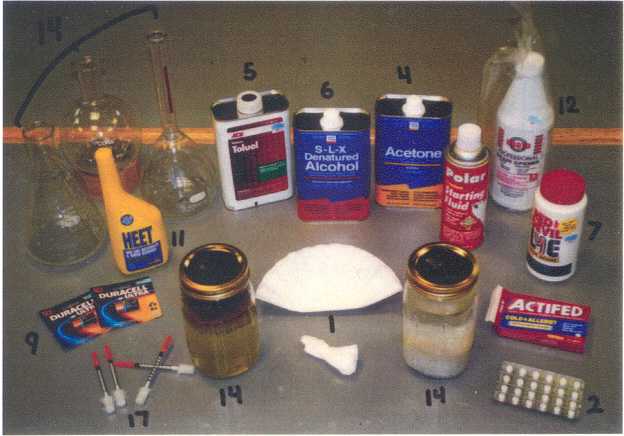 Note: * Items to be aware of, not in photo